A play co-written & performed by Elana Fishbein & Elena Skopetos, and co-written & directed by Peter McNerney, about a family’s reluctant reunion received a rave from The New York Times’ Elise Czajkowski, and tonight is the final performance of its current run at The Magnet theatre: Sisters Three (7:00 pm; $15, The Magnet at 254 West 29th Street)… 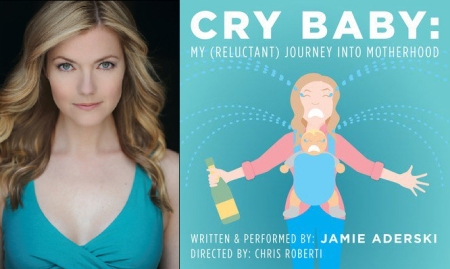 …or experience a superb solo show by Jamie Aderski that provides exceptionally honest and funny tales of what it was like for Jamie to become a mom (for a trailer, place click here): Cry Baby: My (Reluctant) Journey Into Motherhood (7:00 pm; $7, The PIT Mainstage at 123 East 24th Street)

6:00 pm ($5): At this Spank, two new 30-minute shows with intriguing titles audition for a spot on the UCB Chelsea schedule: A High School Production of Seussical: The Musical and Branded Content Will Set You Free

[TOP PICK] 7:30 pm ($7; see also 11:00 pm at The Magnet): Improvisors take an audience suggestion for a title of a new Broadway musical and then perform a staged reading of that musical, making up on the spot the story, songs, and music (via improv pianist & musical director Adrien Pellerin) at The PIT Underground: Staged: An Improvised Staged Reading of a Musical

10:30 pm ($7): New episodes of Saved by the Bell and more are made up on the spot by improvisors wearing the costumes for these shows at The PIT Mainstage: ’90s Night

[TOP PICK] 11:00 pm ($7; see also 7:30 at The PIT): Improvisors take an audience suggestion for a title of a new Broadway musical and then perform a staged reading of that musical, making up on the spot the story, songs, and music (via improv pianist & musical director Adrien Pellerin) at The Magnet theatre: Staged: An Improvised Staged Reading of a Musical

[TOP PICK] Midnight ($7): Each comic is assigned the track of a classic comedy album and asked to perform his or her own version, working with only the title of the track and the persona of the celebrity stand-up. Tonight’s album is Dane Cook’s Isolated Incident, and the comics are Morgan Miller, James III, Alise Morales, Dan Glaser, Alyssa Limperis, Manolo M, and Bardia Salimi, all performing at the UCB Chelsea theatre hosted by Keaton Patti: Laugh Tracks—Live Comedy Cover Album

This entry was posted on Friday, September 22nd, 2017 at 8:53 am and is filed under Best New York Live Comedy Shows. You can follow any responses to this entry through the RSS 2.0 feed. You can leave a response, or trackback from your own site.