Go out tonight, but set your recording device to Comedy Central for two new Comedy Central Stand-Up Presents half-hour specials. Casey James Salengo (Jimmy Kimmel) kicks things off at midnight, and comedy treasure Jo Firestone (one of the most relentlessly inventive comics in the biz; staff writer for Jimmy Fallon; co-author of #1 bestselling Punderdome: A Card Game for Pun Lovers) stars starting at 12:30 am. 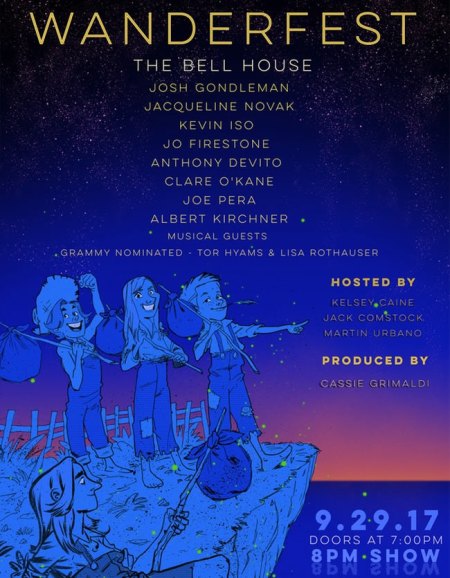 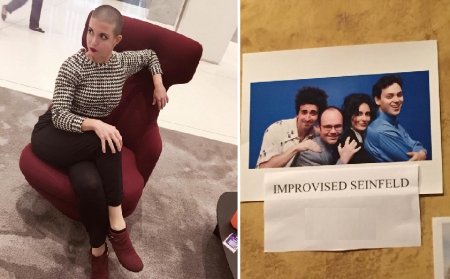 …or catch this great double-bill, which begins with a kinetic 25-minute sketch show set to Top 40 pop tunes danced by delightful rising star Amanda Giobbi (above left; skills include “carrying a wide variety of snacks in my purse at any given moment”) and Kelley Quinn (Lloyd Night, webseries Straight Marriage), directed by Becky Chicoine: Power Hour; and then a typically brilliant 25-minute parody of Seinfeld made up on the spot: Improvised Seinfeld (7:30 pm, $12, UCB Chelsea at 307 West 26th Street)

[TOP PICK] 7:00 pm ($7) Jamie Aderski performs an exceptionally honest and funny solo show about what it was like for her to become a mom (for a trailer, place click here) at The PIT Mainstage (123 East 24th Street): Cry Baby: My (Reluctant) Journey Into Motherhood

7:00 pm ($7): Nine improvisors—including Louis Kornfeld, Shacottha Fields, Pat May, and Evan Forde Barden—”invent, expand, and round out a series of scenes arranged in order by cast size. The show finally returns to the moment where it began: a single performer, out in the open, looking for closure” at The Magnet theatre: The Peel

[TOP PICK] 11:00 pm ($10): NYC’s heavy metal version of a sketch troupe delivers odd, unsettling, and fearless dark comedy. This group which won the ECNY Award for Best Sketch Group and was written up by Jason Zinoman in The New York Times performs tonight at The PIT Mainstage: Murderfist

Midnight ($7): Comics share bad videos they made as teens at the UCB East theatre hosted by Andy Bustillos & Kelsey McLaughlin: Movies You Made in High School

This entry was posted on Friday, September 29th, 2017 at 11:38 am and is filed under Best New York Live Comedy Shows. You can follow any responses to this entry through the RSS 2.0 feed. You can leave a response, or trackback from your own site.