TV Alert: John Mulaney is on Jimmy Fallon;
Patton Oswalt is on Craig Ferguson;
Tim Allen is on Jimmy Kimmel;
Lena Dunham is on The Daily Show;
Wanda Sykes is on Ellen DeGeneres;
Nick Offerman, Jerrod Carmichael,
and Pete Correale are on Conan O’Brien;
Tom Lennon, Cameron Esposito, and
Daniel Sloss are on @midnight;
another genius episode of South Park at 10:00 pm on CC 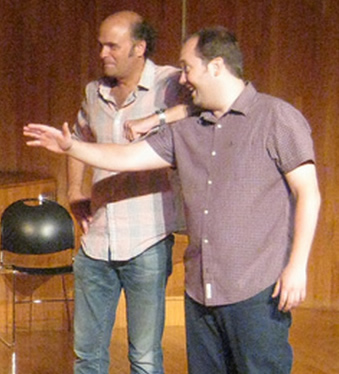 8:00 pm ($10): Solo character comedy, sketch, and/or music from a variety of comics, with Jenn Dodd hosting this parody of a talent contest at The PIT downstairs lounge: Buttski & Glasscock’s New Talent Blowout

[FREE] 8:00 pm: Stand-up teams from all over the country compete for laughs at The Creek upstairs theatre in Queens’ Long Island City hosted by Benel Germosen: Border Wars

[TOP PICK] 9:15 pm ($5): The instructors of UCB’s classes include some of the finest improvisors in the country. In this new weekly show a bunch of them get on stage at UCB East, along with hosts Betsy Stover and Ari Voukydis: Hot for Teacher: The UCB Faculty Show