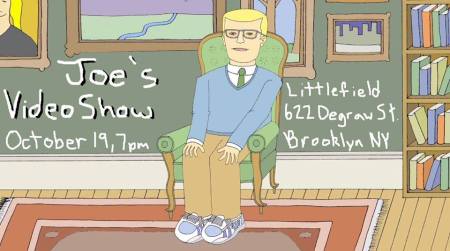 5:00 pm (no cover, 1 drink min.): NYC stand-ups (not announced) sit in the audience and “shout out funny questions, comments, or even noises to the host onstage and to each other whenever they feel like it,” effectively becoming their own hecklers, at The Grisly Pear (107 MacDougal Street) hosted by Will Thilly: Noise Factory

[TOP PICK] [$] 8:00 pm ($12): Theatrical improvisors make up a complete play on the spot at The PIT upstairs theatre: The Improvised Play

[FREE] 10:00 pm: NYC stand-ups attempt to “out-filth each other in this show where no punches are pulled and no topics are off limits” at The Creek upstairs theatre in Queens’ Long Island City hosted by Luis J. Gomez: The Dirt

[FREE] 10:00 pm: An open-mic stand-up show (sign up is at 9:45 pm) providing 5 minutes for each comic whose name is pulled from the bucket at The Creek upstairs theatre in Queens’ Long Island City hosted by Christi Chiello: Lance Bass Space Mic