TV Alert: Matthew Broderick is on Seth Meyers;
Carol Burnett is on The Colbert Report;
Ira Glass is on Jimmy Fallon;
T.J. Miller, Sara Schaefer, and Cash Levy are on @midnight;
another genius episode of South Park at 10:00 pm on CC 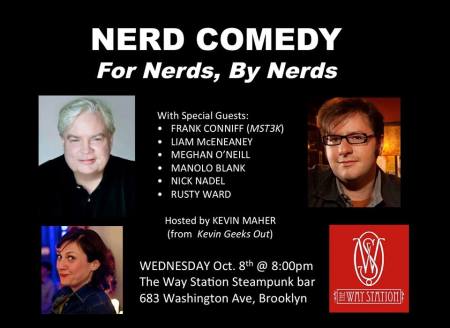 8:00 pm ($10): NYC comics (not announced) performing stand-up or sketch at “a variety show inspired by a poignant evening on NBC’s The Voice in which a contestant found himself going through ‘dark times’ after dropping out of NYU’s graduate program for music business to pursue his true calling: slightly faltering karaoke singing. His parents seemed very disappointed” at The PIT downstairs lounge produced by Melissa Somosky and hosted by Megan Lohne: Dark Times: A Comedic Variety Hour

[FREE; plus FREE BACON] 8:00 pm: NYC stand-ups performing at this show that provides you with both free comedy and free bacon at The Creek upstairs theatre in Queens’ Long Island City hosted by Kevin Berrey and/or Farah Brook: Free Bacon

8:00 pm ($5): At UCB Chelsea, a mini-play about two buddies that’s so stupidly cartoonish I found it unwatchable and left after 10 minutes, but if you like super-dumb sketch aimed at drunk frat boys and four-year-olds then you might enjoy License to Chill…

…and in the second half of this double-bill, duo sketch from Keith Kingbay & Jesse Neil in The Keith & Jesse Show

[TOP PICK] 9:15 pm ($5): The instructors of UCB’s classes include some of the finest improvisors in the country. In this new weekly show a bunch of them get on stage at UCB East, along with hosts Betsy Stover and Ari Voukydis: Hot for Teacher: The UCB Faculty Show

…and in the second half of this double-bill, one of the finest sketch groups in the country. Its writers include stellar comics Silvija Ozols and Brandon Gulya (Brandon also directed this show); and its cast is superb: Brandon Scott Jones, Leslie Meisel, John Murray, Molly Lloyd, Connor Ratliff, and Johnathan Fernandez. (If you’re in show biz, hire them.) This new collection of sketches revolves around the mass shopping experience: Stone Cold Fox Goes to the Mall

[$] [DISCOUNTED] 9:30 pm (NO COVER online or by calling 212.757.4100 using code SKETCHY, but there’s a 2-drink min.): Sketch comedy and musical parody from over a dozen comics at the Carolines Comedy Club: Laundry Day: A Sketch Show

10:15 pm ($5): “Improvisers and stand-ups do what they do best…and then switch places to try their hand at what the other does best. Performing to sold out crowds at UCBT-LA, this show is a cross-discipline Cage Match” at UCB East hosted by Boris Khaykin: Impro(vs)tandup

[TOP PICK] 11:00 pm ($5): Leslie Meisel & Kate Riley chose UCB comics to write sketches for the opposite sex, then cast and directed the scripts. Tonight’s show is the result of this fun experiment at the UCB Chelsea theatre: He Said, She Said: A Sketch Show