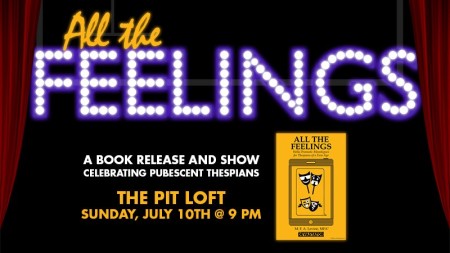 Katie Hartman (wonderfully brave and dark comedy writer/performer; sketch groups Skinny Bitch Jesus Meeting and Hartman & Carl, improv group Gypsy Danger) & Mike Levine (The Onion) “debut their book of searing soliloquies All The Feelings: Hella Dramatic Monologues For Thespians Of A Teen Age. The monologues will be read aloud by the finest sketch performers who emailed us back:” All The Feelings Book Release Show (9:00 pm, $5, The PIT Loft at 154 West 29th Street)

7:00 pm ($5): Three scripted shows—Stories From Sad Children, Two Guys Just Tryna Sleep, and Characters From a Wedding—for the price of one at Brooklyn’s The Annoyance Theatre (367 Bedford Avenue; take J/M/Z to Marcy Avenue or L to Lorimer Street): Triple Feature

[FREE] 7:00 pm: Groups are provided with the titles of improv forms that don’t actually exist and have 24 hours to create that form so they can perform it tonight at The Creek upstairs theatre in Queens’ LIC (10-93 Jackson Avenue): Pluto Presents Fake Forms

7:30 pm ($7): At The Magnet theatre, an awards show for women “tolerating the inherent bullshit we deal with on a daily basis, featuring taped and live performances from some of the city’s best comics” created & hosted by Lizzie Redner: The Femmy’s…

…and in the second half of this double-bill, “two women who look like sisters join forces with two men who look like brothers to become one modern American family, tackling life’s hardest hitting issues: sex, death, and embarrassment:” Fraternally Yours

7:30 pm ($5): Four improv groups make up scenes, but under a strict set of rules. If any rule is broken, someone dressed in a Pokemon costume will appear on stage and punish the offenders at The PIT Loft (154 West 29th Street): Rejected!: Pokemon

8:30 pm ($5): Students of Gary Austin, the founder of The Groundlings, performing improv at The PIT downstairs lounge: Gary Austin’s The Classroom

…and in the second half of this double-bill, “Facebook. Snapchat. Google Maps. A fourth app. What do they have in common? None of them are as revolutionary or life-changing as our (improvised) app. Our app is so incredible and our (randomized) PowerPoint is so convincing, you’ll be begging to throw your money at our experienced, professional dev team:” The Annoyance Presents Improv: An Exclusive Presentation of a Life-Changing New App

[FREE] 9:00 pm: Group Medusa turns a calamity selected by the an audience member into an improvised documentary live on stage at The Creek upstairs theatre in Queens’ LIC (10-93 Jackson Avenue): Medusa Presents Improv Against Humanity

[TOP PICK] [FREE—plus FREE FOOD!] 9:30 pm to grab a seat and eat, 10:00 pm for screening: Come watch a new episode of the excellent second season of The Jim Gaffigan Show (last week’s Episode #4, dealing with the NYC comedy scene, was especially hilarious) with an audience—and possibly have the opportunity to ask questions afterwards of someone involved with the show, as there’s no telling who might drop by. Plus, free food—probalby pizza! (“Yes. Free. Food. It’s what Jim would want.”) It all happens at Astoria Queens’ QED: A Place to Show & Tell (27-16 23rd Avenue): The Jim Gaffigan Show Official Watch Party

[FREE] 10:00 pm: An open-mic stand-up show (sign up is at 9:45 pm) providing 5 minutes for each comic whose name is pulled from the bucket at The Creek downstairs lounge in Queens’ LIC (10-93 Jackson Avenue) hosted by Ian Kitchen: The Grandstand

This entry was posted on Sunday, July 10th, 2016 at 1:21 am and is filed under Best New York Live Comedy Shows. You can follow any responses to this entry through the RSS 2.0 feed. You can leave a response, or trackback from your own site.