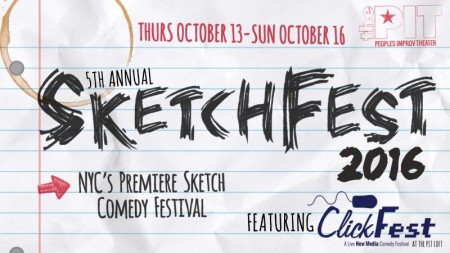 Four days of sketch comedy—starting tonight with 18 half-hour sketch shows—at SketchFest 2016 (7:00 pm-Midnight, $10 per show or $60 for an all-you-can-see pass, The PIT Upstairs and Downstairs Theatres at 123 East 24th Street)…

…or enjoy a burlesque comedic horror tribute to the works of Stephen King spearheaded by Cherry Pitz (a.k.a. sharp storyteller Cyndi Freeman) and Brad Lawrence (Moth GrandSlam Champion), who are both pictured above: Hotsy Totsy Burlesque Tribute to Stephen King (8:00 pm, $10, The Slipper Room at 167 Orchard Street)…

…and in the second half of this double-bill, puppet sketch comedy: Simon’s Street

9:00 pm ($10): “In the magical town of Sparkleberry, everyone’s an artist, writer, and creative spirit. Citizens of Sparkleberry are kind, compassionate creatures, with hearts of gold, but they’re also total idiots. But that hasn’t stopped them from writing and performing their hearts out. Join me and my theater troupe as we show you select scenes from some of their greatest works” at Brooklyn’s The Annoyance Theatre (367 Bedford Avenue; take J/M/Z to Marcy Avenue or L to Lorimer Street): Snippets From Sparkleberry

7:30 pm ($6): A storytelling open mic, with those whose names are pulled from a hat getting 6 minutes on stage, on any topic (no theme this month) at Astoria Queens comedy venue QED: A Place to Show & Tell (27-16 23rd Avenue) produced by Lori Baird and guest-hosted by Julie Polk: Talk Therapy Stories

[FREE] 10:00 pm: Walk-in open mic (with names selected from a bucket) to do anything you want for 5 minutes—”chat, rant, plug, tell a story, be a character, play a game, review a new religion”—for a podcast recorded at The Creek downstairs lounge in Queens’ LIC (10-93 Jackson Avenue) hosted by Mike Guild & Mike Mercadal: The Open Mic Podcast

This entry was posted on Thursday, October 13th, 2016 at 9:40 am and is filed under Best New York Live Comedy Shows. You can follow any responses to this entry through the RSS 2.0 feed. You can leave a response, or trackback from your own site.